Showing posts from July, 2012
Show All

Working in the Fresh Air 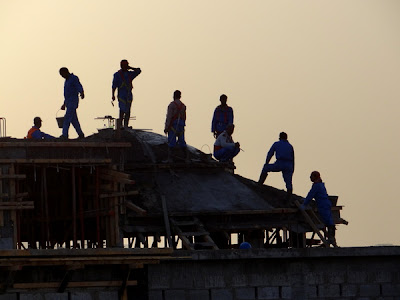 finishing the roof - muntazah, doha Spare a thought for these guys. I'm on a level with them, literally, because my Muntazah apartment is on the seventh floor. Their building is also seven storeys. The main difference is, mine is finished, with roof, windows and air conditioning. Theirs is still an empty shell: columns, slabs and block-work. And the half finished 'feature' on top which the eight of them are working to complete, probably by yesterday. Another difference is: I can afford to live in mine; they can only work on theirs, outdoors, in searing heat and sandstorms (yes, that's why the sky is pink) until the end of the shift. Then it's the clapped out American school bus, back to the labour camp. Once upon a time, the British Labour Party Constitution aspired, in Clause Four: "To secure for the workers by hand or by brain the full fruits of their industry and the most equitable distribution thereof that may be possible upon the basis of the comm
Post a Comment
Read more

Just a Wall in Muntazah 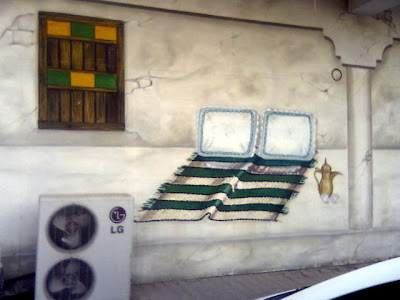 I've no idea why this odd piece of wall painting is where it is, tucked away in the middle of Muntazah amid small local shops and old apartment blocks. What you're seeing is a flat rendered wall. The LG split unit is real and is sitting on the real pavement, flat against the wall. Everything else is painted. There's no step, no pillar and certainly no coffee pot. There's also no signature. I wonder if it might have been painted by Muriel Terzano Lamy ? The style and quirkiness is not dissimilar. I suppose we'll never know, Soon, of course, there will be no wall either as everything old and lo-rise will inevitably be swept away, for the bright new city of 2022.
Post a Comment
Read more

By Para Glider - July 04, 2012
Anyone planning to book into Doha Ramada or Ramada Plaza might find it a bit tricky. They are no more, since Sunday 1st July. Their disappearance from the scene was less dramatic than the blowing up of Rydges. In fact they were simply bought out and rebranded by Radisson Blu. Hardly anything has changed. The courtesy matchboxes on the bar no longer carry the Ramada logo, nor do the staff's name badges. And that's about it, apart from an abortive attempt to light up the gold facade of the building with blue light. Not possible, chaps; blue and gold makes brown. But, given that the Sofitel changed its name to Mercure seven or eight years ago without anyone noticing (least of all the taxi drivers who still meet requests for the Mercure with blank looks), what are the chances of the 'Ramada' word dropping forever out of the Doha lexicon? Are we all supposed to to start talking about Radisson Junction? Unlikely. All in all, it looks like business as usual.
Post a Comment
Read more
More posts