Showing posts from 2018
Show All

By Para Glider - October 16, 2018
'Accidentally killed during an interrogation' does not mean that the video camcorder suddenly exploded. It probably means that the torturers misjudged the cardiopulmonary health and resilience of their victim. Incompetence and evil form a lethal cocktail. For a State to offer 'Accidentally killed during an interrogation' as an exoneration is beyond belief, with its implied normalisation of torture, and the insulting assumption that others will accept this normalisation. But even in a world as dark as this 'exoneration' requires, producing the body for forensic inspection could provide absolute corroboration of the 'accident'. Continued failure to do so points to something darker still. Meanwhile, UK and USA continue to sell arms to this regime.
Post a Comment
Read more

By Para Glider - September 12, 2018
I had just changed into my extreme hot weather walking kit and was on the point of going out when I thought I heard a cricket or cicada chirruping somewhere in the house. Clearly a quick eviction was called for. I stood still to listen and immediately the chirruping stopped too. (This is typical cicada behaviour. Whenever they think you're looking for them, they shut up and concentrate on being invisible). A few more steps to check behind the door were accompanied by a few more chirrups from somewhere nearby. Stop by the door and immediately the chirruping stopped too. This pattern repeated a few more times. Walk, chirrup, stop, silence! Walk, chirrup, stop, silence! Addidas hot weather track pants have an inner mesh or gauze layer to wick sweat away from the thighs. Worn inside-out by mistake, this mesh or gauze, swishing against itself when you walk, makes a noise exactly like a small cricket or cicada. And it stops when you stand still. You should try it sometime...
Post a Comment
Read more 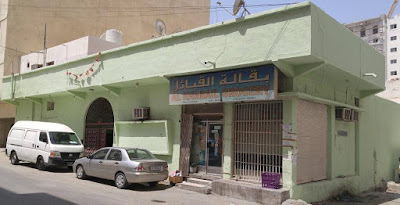 There are grocers. And there are green-grocers. And it would seem there is at least one pastel-green-grocer, nestled snugly in downtown Doha, somehow keeping its head below the demolition radar. It would almost be camouflaged, if there were anything growing within a hundred yards, apart from children.
Post a Comment
Read more

By Para Glider - August 30, 2018
This blog started out as Helga's Chickens. Later, it became The Paranormal Hotel, and more recently, Paraplexed at the Paranormal Hotel. The changes were occasioned by such major events as: Helga's retirement and/or exile to the (now demolished) Rattlesnake, my move from Dubai to Qatar and the final closure (after several aborted mini-closures) of Jockey's Pub. Well, dear readers, another major event has occurred. I have relocated again, this time from Qatar back to England. Retirement? Not sure yet. Technically, I am a pensioner, having crossed the formal finishing line. But my return home was triggered not by chronology but by a debilitating attack of shingles in the left ophthalmic nerve. If anyone ever offers you this, even on a trial basis, smile sweetly and say no. It hurts a lot, for months. But that's behind me now, give or take the odd twinge, and with summer drawing to a close, the homing pull of pipe and slippers may very well prove a weak force. Winter may
Post a Comment
Read more

By Para Glider - February 03, 2018
The other day, I received a spam comment which made me laugh. I've deleted the links to sanitise it. It is very much the usual rubbish, but ends spectacularly badly, even for spam. See if you agree. We encourage you to peruse through our gallery and be dazzled by the beauty of the beautiful girls on Qatar Escorts. Whether you are interested in hiring one for companion, dinner in an intimate Qatar restaurant, you have come to the right site. What’s more, we have the best girls to accompany you to that corporate function. We have girls that will be on your side for that special occasion and also help you have a real time during a lively night out in doha. We happily accommodate requests for extended visits; we work with a team of elite escorts who make the best travel companions allowing you to make weekend plans in and out of Qatar. Pick an escort from our Doha Escorts gallery, and she will cater to your diverse tastes. We have girls of all sizes and looks. From thin, small bre
Post a Comment
Read more
More posts