Showing posts from December, 2012
Show All

Waiter, there's a Mouse in my System 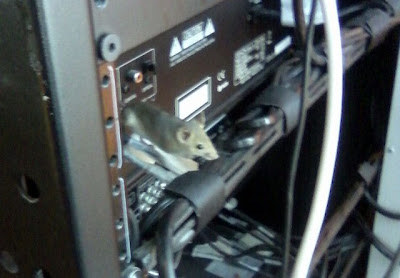 a five-star mouse Idling away an hour or so this afternoon, waiting in a bar for someone who had already left, I spotted a mouse running around on the cables at the back of the sound system. S/he (for who am I to presume to sex a mouse on sight?) seemed quite proprietorial towards the rig, darting in and out of sight among the various modules but never venturing down to the floor and the wider World beyond. I drew the barman's attention to his non-paying lodger and in so doing triggered a performance of extrication and capture that involved no fewer than three deputy managers, two waitresses, the barman himself, a box of tissues, a hand towel and a long spoon. Performance over and calm restored, I was on the point of asking for my bill when I was approached by yet another deputy manager, this one a supermodel, or could have been, with a first class honours degree in Charm. She apologised profusely for the 'unfortunate event', expressed the hope that it hadn't spoil
Post a Comment
Read more

Mr Mustard in the Living Room with the Lead Pipe

Paraglider's 60th birthday celebration was nothing if not an international affair. The party of sixteen included representatives from: China (North and South), Singapore, Cyprus, UK (Scotland and England), Lebanon, USA, Canada and Japan. The restaurant (Oasis Beach Club) was Italian and Chinese, the music was courtesy of a Filipino duo and most of the remaining clientèle were local Qataris in national dress. For reasons I can't quite remember, it became necessary at one stage to establish the correct Japanese rendering of the Cluedo phrase: Mr. Mustard, in the Living Room, with the Lead Pipe . You may want to keep this handy, for the next time you find yourself playing board games in Tokyo. It goes like this, complete with phonetic transcription:
Post a Comment
Read more
More posts