Showing posts from March, 2010
Show All

Goodbye Muntazah - it's been a ball.

By Para Glider - March 28, 2010
Paraglider has, this weekend, forever abandoned Muntazah (Doha, Qatar) for the greater delights of Bin Mahmoud (Doha, Qatar). And why? Did it have anything to do with the Park being 'closed for maintenance' for four years? ... where 'closed for maintenance' probably means 'if we keep the gates locked long enough people will forget the park exists, then we'll be able to build on it and make money'. Or did it have more to do with the fundamental design fault in the sewerage system that caused it to back up (don't ask!) every few days, if only for an hour or two? Certainly it had nothing to do with the two birds that visited the balcony every day to glean a few more threads from the discarded mop in the corner, straining their every sinew to sever the perished hemp from the wood, before flying off, with their spoils, to their nest in the palms. No. These little ones were welcome guests and I'll miss them. The simple truth is, I liked the place, warts an
Post a Comment
Read more

Do your bit - take in a homeless cockroach

With the unprecedented orgy of demolition underway in Doha, one wonders what will become of the millions of neo-vagrant cockroaches and other bugs. Displaced people get rehoused, or herded off to labour camps, depending on their status. But nobody's rehousing the roaches, at least not intentionally, though I'm sure more than a few will have taken up residence unannounced, in the juice bars and cafes that have so far avoided the bulldozers. There's a crisis in the making here. Unless someone builds a roach sanctuary soon, the poor waifs will have no choice but stow away in the foundations of the new Dohaland, pending completion of the project, where their luxury accommodation awaits them. And that would never do.
2 comments
Read more

Oops - the New Friendly Face of Censorship in Qatar 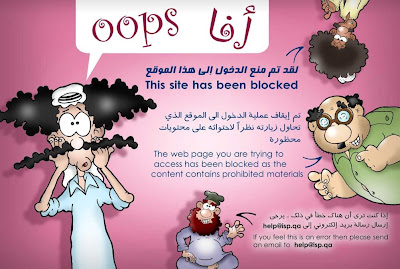 Gone is the stark blue warning message. From today, happening on a prohibited site from Qatar brings up this child-friendly cartoon page instead. Only the wording is unchanged; they didn't even take the opportunity to amend the phrase "the content contains.." OK, what do we think - is Censorship by cartoon any less patronising than censorship by officialdom? And is anyone fooled?
Post a Comment
Read more 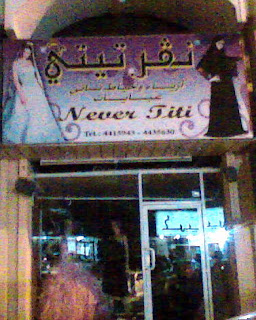 Never Titi. Eat your heart out Akhenaten. Your Great Royal Wife, or chief consort, has finally made her mark, heading up an abayat in sunny Doha. And in so doing she edges the Kharbash School of Motoring (Karama) out of number one faux pax shop sign position (until further notice). It is the inevitable loss of gems like this that takes the edge off the Heart of Doha renovation project. Yes, it will be impressive, but will it be half as much fun? Answers on a postcard (or in the comments section...)
Post a Comment
Read more

Running out of neurons.. 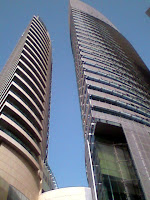 Flicking through the odd phone pics I took on my last Dubai trip, I came across this twin tower shot that has me flummoxed. It doesn't seem to be the Emirates Towers, but for the life of me I can't remember where they are. All I can say is that the snap before was at Paranormal and the one after was at Seaview, which suggests they are Bur Dubai-ish. Would anyone be able to enlighten me?
2 comments
Read more

Double D-lights at the Para

By Para Glider - March 06, 2010
The good thing about being an occasional visitor to Dubai is that the changes are more in evidence than perhaps they are for those living with them every day. So, the Metro wasn't open last visit, and this time it was, albeit not fully. And what a fantastic change that is. Cheap, fast, clean and efficient, it makes a move back to Dubai a far more attractive proposition. Then there's the licensing law change, reintroducing the two-hour dry spell from four till six. I can't enthuse over this one, and neither can anyone else I've compared notes with. All we can say in its favour is that it is less irritating than Qatar's national ban on opening before five p.m. As for the Paranormal itself, I spotted no changes at all since the last time, apart from the usual variation in personnel. One girl was a clear candidate for the most impossible figure challenge, as she probably weighed only fifty kilos total, with five of these in each cup. This, plus the stilettos, and you
12 comments
Read more
More posts