Showing posts from February, 2013
Show All

Le Club, back in contention, maybe

le club, doha mercure grand, formerly sofitel - the last word in sophistication The time has come, the Walrus said, to re-evaluate Le Club in Sofitel. Regular readers here may remember that some years ago the place was heaving every night. A succession of good lively bands coupled with a liberal entry policy more than made up for the general air of dilapidation verging on squalor. It was never a place to take the legendary maiden aunt; nevertheless, a good time could be had, dependably, for the moderate outlay of the price of a couple of beers. Where it all went wrong was when the management decided a few years back to make it members only and restricted the membership to men and married couples. When people stayed away in droves, they 'compensated' for, or more accurately compounded their losses by increasing the prices and hiring cheaper bands. But, it's an ill wind that blows nobody some good. Ramada/Radisson's recent decision to blanket ban Chinese girls with
Post a Comment
Read more

Things I don't do any more

By Dave - February 09, 2013
I've never actively given anything up... but every now and then I realise that I've not done something for a long time. Such a long time, perhaps, that I can't really say I do it any more, whatever 'it' is. This week, I've had a couple of days off work for Eid al-Adha. Now, extra days off in Doha can be quite long. Especially for one allergic to shopping malls and five star hotels. So, between sessions on the computer and sessions on the guitar, I found myself reminiscing over some of these things I never actively gave up but which just drifted out of my life, somehow. For example: I don't run marathons any more In fact, I don't compete in any road races. I used to. For about ten years, between the ages of 35 and 45, I pounded the pavements regularly, training and competing. I'd do about ten events a year, mostly half-marathons and triathlons, with the occasional marathon thrown in for good measure. I wasn't good, of course. My personal goal was
5 comments
Read more

Over to you, David Cameron... 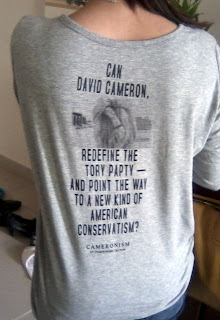 Paralleling the fatuous Western fashion for tattooing random Chinese characters on various body parts, there is an equally strange but happily reversible Chinese fashion, especially among the younger ladies, to wear T-shirts emblazoned with more or less random English words and phrases. A few I've seen recently include: "Garage Snorkelling Crew", "Feathers from an earlier time", "The mist has spoken from the hill", plus several that more resemble samples from the shredder bin. But until today, nothing as surreal as this offering: CAN DAVID CAMERON  (picture of horse here) REDEFINE THE TORY PAPTY (sic) AND POINT THE WAY TO A NEW KIND OF AMERICAN CONSERVATISM? Well, can he? And if not, why not? Surely his Papty could only benefit from his attempt? The wearer, unsurprisingly, had no idea what the words meant or even how they were pronounced, had never heard of David Cameron or the Tory Papty, far less the Party, but liked the horses, the cu
Post a Comment
Read more
More posts