Showing posts from August, 2021
Show All

This song by Harry Gordon is about 100 years old and is in the Scottish music hall tradition. It's short because it was the lead into a stand-up comedy routine in character. The character in this case being a fireman on the footplate of a steam engine.
Post a Comment
Read more 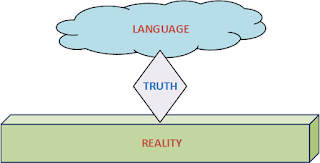 The truth, the whole truth and nothing but the truth truth anchors language to reality I hope I am never required, whether under oath or secular affirmation, to tell the truth, the whole truth and nothing but the truth. I would have to refuse, on logical grounds. If 'truth' is to mean anything at all, it can only mean 'that which is', in other words, reality, expressed in language. And there is the first problem. Reality is infinitely more complex and subtle than any human language, which fact in itself makes nonsense of the phrase 'the whole truth'. There are not enough hours in the day to state the whole truth even about something as simple as entering a room. Nope, 'the whole truth' has to go, as a logically unsound concept. That was easy, but what about 'the truth'? The problem here is human fallibility in both perception and memory. I can say, "She was wearing a purple jumper". But was she? Maybe it was blue. Maybe it was a cardig
Post a Comment
Read more
More posts