Showing posts from March, 2011
Show All

Standing in the Heart of Doha 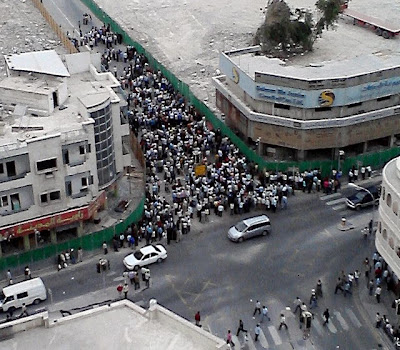 just another friday night, for the men who are building a new doha It has all the appearance of a muster point. Why else would several hundred people gather in a condemned cul-de-sac in the heart of Doha, except to stage a march or demonstration? But no, this is just another Friday night. The same crowd gathers every weekend, and for no better reason than Eccles' excuse - everybody's got to be somewhere! They don't march. They don't protest. And at the end of the night they melt back into invisibility. These are just some of the men who are building the bright new Doha, not the Engineers and Architects, but no less vital in the grand scheme of things. But why choose the demolition site as a hangout, especially when the Corniche is less than a kilometre away and the fashionable Souq Waqif a mere three hundred metres? Could it be that this is one of the few places from which they won't be 'moved along' by the police? The simple rule here is that rich peop
6 comments
Read more

Patrick Campbell, BBC TV, 1970 Lying awake to the cacophonous accompaniment of nightlong rubble clearance from the demolition site below my balcony, my sleep deprived mind came briefly, if randomly, to rest on a reminiscence of an old-style Irish columnist, raconteur and 'personality' (we had these in the days before celebrities) called Patrick Campbell.  It occurred to me that if he were alive today he'd have made a perfect blogger, with his unfailing ability to weave something from nothing. For example, long before Douglas Adams wrote Hitch Hiker's Guide, Patrick Campbell had penned a short story called Tooking for a Lowel, possibly the first literary exploration of the effects of separation from one's bath towel. Did Adams plagiarise it? Almost certainly not, but it's not important. The reason for Campbell's night visitation was another of his stories in which he describes, in excruciating detail, trying to write his column while a road gang were givin
2 comments
Read more

It had to come sooner or later and today was the day. The Heart of Doha demolition phase is spreading its destruction wider and wider. A couple of days ago, the labourers moved out of their squat, the one right below my balcony, and today the JCB moved in. Here's what it looked (and sounded) like: In fact it was quite impressive to watch at such close quarters, and in its favour, the demolition noise completely masks the pile driving from Qatar Airways crew city construction site in front of my apartment block. I'm now wondering what will happen next. The footprint of the demolished hovel isn't big enough for the type of high-rise they're putting up around here. Unless, of course, they knock down my block too. It's not unlikely, as it's only on three floors and fairly run down. Oh well, house-hunting time again...
Post a Comment
Read more

About this no fly zone...

By Para Glider March 16, 2011
It's OK in theory but what will the spiders do for food?
Post a Comment
Read more

Elena Forbes A good night was had by eight of us yesterday at the Doha Rotana Jazz Club. Many Doha music fans still don't know of the existence of this club, or even of the Oryx Rotana itself, probably because the hotel, located close to airport immigration, is a relatively low rise building not easily seen on the skyline. The band currently resident is called Turning Point, with a back line of drummer (who also sings well), keyboard and bass, interestingly a six-string electric, fronted by an excellent tenor sax man and feature vocalist Elena Forbes. Ms Forbes made quite an impression before singing a single note, by turning up in the lowest cut evening gown Doha has seen for a long time. The one she is wearing in the publicity pic is modest by comparison. But that aside, she could hold her own vocally even dressed in a sack. The venue itself is very pleasant, and the staff were friendly and attentive. Late in the evening, we were even treated to a spectacular juggling display
Post a Comment
Read more

It happens every month. The Laughter Factory stand-up comedy show comes to the Shehrazad Sports Bar, displacing a large clutch of regulars, who then turn up as refugees in the normally peaceful Library. Poor lost souls, they stand out like sprained toes in the more civilised environment, shouting at each other from habit (Shehrazad is noisy), chain smoking (Shehrazad is foggy) and in some cases staring vacantly at the walls, unable to comprehend the absence of TV screens showing football. Guys, it's called The Library Bar. Does that not tell you something?
2 comments
Read more
More posts