Showing posts from January, 2008
Show All

It's a pub. It's made of stone and brick and has a tiled pitched roof. This one is called the Cavalry Arms and has a sign to prove it. It has chimneys - remember those? Local people and visitors are allowed to go into it, wearing whatever they please. There is no door policy. It does not close on public holidays. It sells beer, not just lager or 'creamflow'. It is not on the 23rd floor of a 5-star hotel. You can build a pub without driving piles or pumping concrete. Just remember to start 200 years ago.
12 comments
Read more 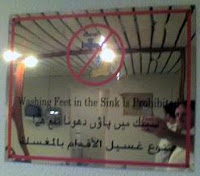 Washing Feet in the Sink is Prohibited. This notice, stuck on the wall in the gent's lavatory in the Doha Stufital's 2nd floor club more or less sums up the difference between said Stufital and the Paranormal. In Paranormal, we know how to behave acceptably badly without being told. In Stufital, the clientèle (who have never, till now, been graced with a French epithet) have to be told how badly not to behave. But let's spare an ounce of consideration for the Stufital Outlets Management who, apparently, have not yet conquered the subtle distinction between sinks and basins (they're French, after all) but have espoused the 'show, don't tell, but then tell it anyway, just in case' maxim of public communication. They consistently book excellent bands, so all is forgiven.
39 comments
Read more

A long time ago, Paraglider found an Apostle teaspoon on a family picnic at Tairlaw Lynn. Later, by demonstrating that there were now fourteen such spoons in the house, and two Johns, he was finally believed not to have brought it with him in his pocket. Some things come to pass, sadly. A mere three posts ago, we hinted that the Oddmiral Plaza might not exist - now we learn that it no longer does. Shame. Six posts ago, we compared the Qatar Emir's vast likeness with Vegas Vic, the 40-foot neon cowboy (howdy habibi!) Far be it from me to suggest that his Highness reads the Paranormal blog, but the fact remains, his image no longer welcomes visitors along the Airport Road. Are we influencing events here? Surely not. But just in case, maybe we should go back to our roots and just talk about the girls clustering round the central pillar. Like Victoria - an impossible blend of heels, hair and dangling earrings, whose legs are just too slim to accommodate knees. But that's OK. She
10 comments
Read more
More posts