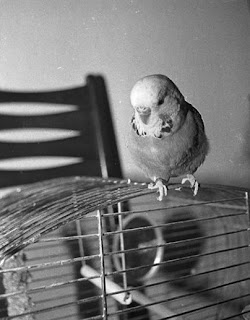 This is Westminster in Glasgow in 1979. Westminster was a classic green budgie bred by Doctor Cant, biology teacher, badminton player and of course, budgie breeder. Doc was mildly scandalised by our choice of name. "He'll never learn to say it", she said, and was absolutely correct. West never showed the slightest interest in learning to speak. In some ways he was a failure as a budgie. Speaking doesn't matter, but he never really mastered flying either. He could circle for a bit but then would spiral down, apparently lacking the energy or technique to gain elevation. In spite of this weakness, he somehow managed to survive for about ten years in a house with cats, without ever being seriously eaten. Mrdina caught him once but was persuaded to let him go largely intact (but highly indignant). His speciality, apart from greenness, was copulating with any finger he was allowed to perch on for more than a minute. Budgies aren't meant to do that but it wasn't something we wanted to discuss with the good Doctor. It wasn't her fault that one of her birds developed deviant proclivities.
black & white