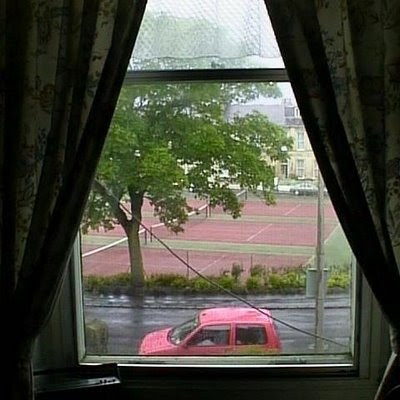 It's hard, looking at this window, to think back to the fifties, because of the much stronger recent memory of Mum's last few days, bedridden here, before her final trip to hospital. When I took the picture, Mum only had a week or two more to live. By this time, the room had become Mum's room of course, but in happier times it was always Mum & Dad's room.

Except for Sundays, Dad was always first to get up in the morning. His routine was to start his (cold) bath running then go to the kitchen and prepare the coffee percolator. This was great, because he would take the old grounds through to the bathroom and chuck them into the thunderbucket, where they would stick to the white Shanks Vitreous China. If you got up at just the right time, you could make streamy pictures in the dark coffee grounds. You were doubly rewarded for this game, both by the pattern produced and by the combined smell of stale coffee and urine. Sadly, none of these artworks are preserved, since none survived the first pulling of the plug.

The next duty was to gather up Dad's discarded pyjamas and dressing gown, roll them into a ball and carry them along the corridor to Mum & Dad's room, throw them onto the bed and shout 'Bundle!' After his bath, Dad didn't go directly back to his room, but stopped off in the spare room to shave with an electric razor and apply Uwapus*. Sometimes, he'd give me a quick shot of the razor. It was warm and buzzy.

Mum's dressing gown was red and had four or five buttons so that you could find out how tall you were. Usually about the same as yesterday, as the buttons were six inches apart, but hope springs eternal. Douglas was a whole button taller and Derrick was off the scale.

And that, dear readers, concludes this tour of the house by windows. Somehow, I forgot to take a picture of the bathroom window, but as the bathroom has had an honourable mention in this last episode, I don't feel too bad about it.