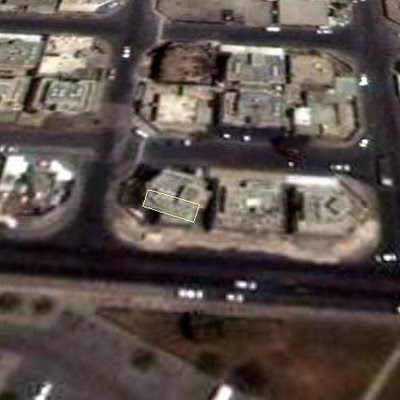 Just because I've run out of windows in Ayr surely doesn't mean I've run out of inspiration? After a lay-off of a few weeks from the last post in the house series, I thought I'd better start something new. So, here goes: again courtesy of Google Earth, this is my small corner of Doha. My flat is on the first floor, to the front of the building, facing the street. Across the road, the lads play football or cricket in the early morning on the triangle of burnt grass, while waiting for the ancient American school bus to come and take them to work. Adjacent, to the left, is the Dubyani Restaurant, a taxi drivers' howff, or tea-howff, which is quite handy because it means I never have to wait long to get a cab.

Behind is the start of mini-Pakistan, an area that stretches almost to Sofitel and is home to a large community of Pakistani workers. Most of them have been here for a long time and work in and around the old city, in shops, juice stalls, garages, filling stations, repair yards and the like. They are the city's human infrastructure; without them, the place would curl up and die. They don't work on the big construction projects or in the oil & gas plants. The guys that keep these concerns running are imported in large work gangs from the Subcontinent and are mostly housed in compounds out of town. You don't see them much because they are not given the freedom of the city. They are not even allowed to walk on the Corniche or enter the shopping malls, because it's not good, apparently, for the rich to see the poor.
doha