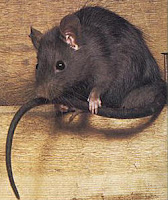 A reader, Pararegular, today left such a paratypical comment on an earlier post that I thought it worth promoting to a post in its own right. Any more stories like this, Mr. Pararegular, and I'll happily extend you authoring rights here. Seriously.
------------------------

Great blog, by the way, but have you heard about the Paranormal rats? Yes, I said rats.

One should almost expect to see the odd vermin patrolling the vicinity of a crumbling 30 yr old hotel, but you don't expect to see them making an appearance in a throbbing Chalky's bar half way through a busy evening!

The first made a rather comic appearence, just as the second D.J. of the night was warming up.
He emergerged from behind the left-hand LCD screen, and boldly skipped and hopped all the way along the top of the wood paneling, pausing briefly to check out the crowd, before vanishing back behind the panelling via the right-hand LCD.
What made this even more surreal, was when the clientel started shouting and pointing, the unaware D.J. wrongly assumed the crowd were highly enthusiastic about the track he was playing, and almost took a bow!

The second was a few weeks later, and even bolder.
He appeared high up in the right corner at the bar, and took a stroll around the "clean" up-turned pint glasses, freaking out all chickens in the corner, before vanishing from whence he came!

The day after, the Manager stated one had been caught overnight, proudly holding his hands out in front of him like a fisherman grossly exagerating the size of 'the one that got away'!

I had been wondering what had happened to all the small roaches one used to spot now and again!
jockey's pub