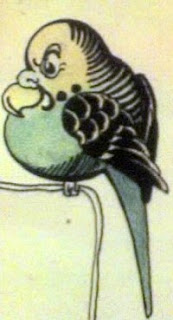 You see, there's nothing in the name 'Paraplexed' that specifically precludes featuring a 42 year-old cartoon of an irate fat budgie. I know it is 42 years old because, on the reverse side, in pencil, one can still read the deathless verse:

This budgie was drawn by me
In nineteen seven-tee

where the 'me' in question was not me, but my brother, who was 21 at the time and just embarking on a teaching career from which he has recently retired. Strange that a throwaway sketch produced merely to lighten a moment should have survived so long (in the bottom of the drawer I was tidying this afternoon) only to be replicated, albeit briefly, on several thousand computer monitors across the world. Stranger still that it might now endure in file format for the remaining duration of human civilisation.
And strangely unfair that this nameless budgie should be singled out for immortality ahead of the hundreds or even thousands of blackboard chalk drawings my brother produced almost daily, to illustrate a lesson, only to rub them out at the bell to make space for the next. Maybe there's something in Calvinistic predestination after all:

"What was I, or my generation,
That I should get such exaltation?
I, wha deserv'd most just damnation,
For broken laws
Sax thousand years ere my creation,
Thro' Adam's cause!"