By Para Glider - November 10, 2012
What you do, of course, is scramble over the mound of rubble, picking your precarious way until you can go no further, leap across the trench grabbing the red boom to stop yourself slipping back and into the hole, then squeeze out between the red and the white booms to the relative safety of the road beyond. You do this on average three times a day if you're a Doha walker. You do it in Musheireb, in Muntazah, in Mansoura. You do it because the alternative is usually to retrace your steps for up to a hundred metres and walk round the outside of the barriers, cheek by jowl with the crazy traffic. You do it because, second only to demolition, Qatar's national pastime is digging up the roads and pavements. And unlike most other cities, in Doha they generally make no provision for alternative walkways, probably because if you are insignificant enough not to be driving a Land Cruiser you don't really merit 'normal' consideration. 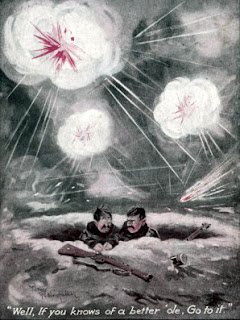 My caption, "Well, If you knows of a better 'ole, go to it" in case you were wondering, was first used by the World War One cartoonist Captain Bruce Bairnsfather. If you've not come across his work, check it out. Nearly a hundred years on, we're still blowing ourselves to bits. Only the weapons change. The inhumanity is constant.
doha reconstruction