By Para Glider June 06, 2017
There are none left on the roads. Or if there are, they are hiding pretty well. Used to be, every time you turned your head there would be an orange monster of a bull-nosed Mercedes truck snarling along the road with a load of demolition rubble or rattling back empty to pick up a new load. They were so much part of the Doha scene that you scarcely noticed them, after a while. 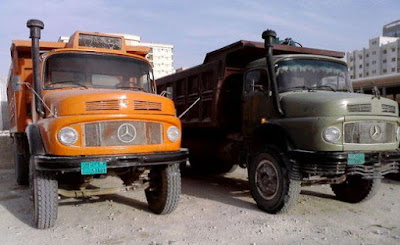 But a couple of days ago, don't know why, it suddenly occurred to me that I hadn't seen one for a while. So, I started to make a point of looking out for them. And sure enough, they have all gone, as if by fatwa or royal edict. It can't just be their age. There are fleets of JACs and MANs (Men?) just as old and ugly and still working. But the bull-nose Mercs had presence and personality. They were fun and, if they have really been scrapped or pensioned off, they will be missed.

As will the aeroplanes, the food and the drinking water. Thanks Donald.