This is not about Iran 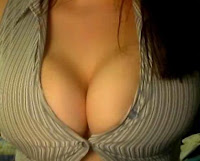 Earlier this week, in another place, someone posted a piece that wasn't about Iran. Someone else promptly commented that the piece was not about Iran but should have been, because Iran is more important than the subject at hand. And so it is, but so what? Barack Obama is marginally more important than the girls in the Paranormal or the security in Stufital, but he'll wait a long time before he gets another mention here. The commentator was out of order, less for telling another what to think than for making the assumption that the thought was not already in place. We don't have to do long faces on cue. But for anyone worried about offending the thought police, feel free to adopt Parglider's Suitable Simile formula, guaranteed to imply depth below the froth. For example: Narcisa's voluptuous cleavage was like the FTSE 100's recent roller coaster profile... You get the idea.