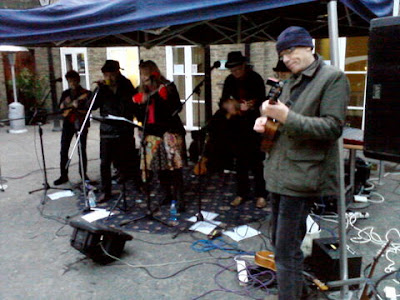 Last week, on a flying visit to London, I was passing time pleasantly in Brick Lane, enjoying the sights sounds and smells of the Sunday morning street market, when I came across these buskers. The first group were semi-official, in that they were playing a prearranged slot in a provided venue. A ukelele band, just out for a good time, they certainly cheered the small crowd of passers-by.
The second was a loner, a maverick. A one-man-band complete with a mini drum kit to back his pretty wild guitar playing. He was actually quite impressive, in a Hendrix throw-back kind of way. 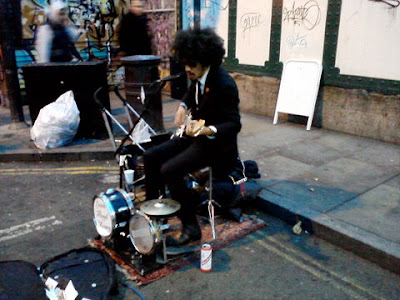 I was able to to grab a short video recording of both. Mobile phone quality of course, but good enough to give an impression of how they sounded. Here they are:


I wonder how well he'd go down in the Souq?

Postscript: Since posting this I've discovered that this guy's quite a regular in Brick Lane. His name is Lewis Floyd Henry. He pops up in a few youtube videos, some much better than mine. Maybe I'll buy a decent camera!
bands and music