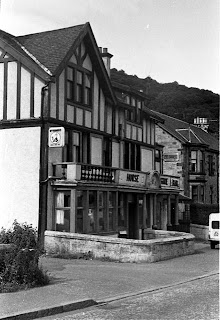 I can't quite remember why I took this shot of a fairly ordinary pub in Bowling (near Dumbarton). Maybe it had something to do with the mock black and white frontage. That's not impossible, because at the time I'd not ventured much out of Scotland. A few years later, in Shakespeare country, real black and white cottages were all around me and I wouldn't have given the imposter a second glance.
But looking at it now, what stand out, literally, are the signs for WM. YOUNGER'S and TENNENT'S LAGER. Because this was the era of  the keg beer, before the real ale revival came North of the Border. Most Scottish bars served Younger's Tartan Special and Tennent's Lager and if you were lucky McEwan's Export. A few also offered Light, which was dark, being the opposite of heavy.
And that was your lot, apart from a handful of specialist Free Houses that flew the flag for McClays, Deuchars or the holy of holies, Belhaven. Nowadays (for the benefit of any English beer drinkers considering a Scottish holiday) all that has changed. The small brewers came back with a vengeance and the big ones fought a rearguard action by relaunching traditional lines. It's quite safe to come North. You can get a decent drink almost anywhere.
And you can still find Tennent's Lager which knocks spots of Carling...