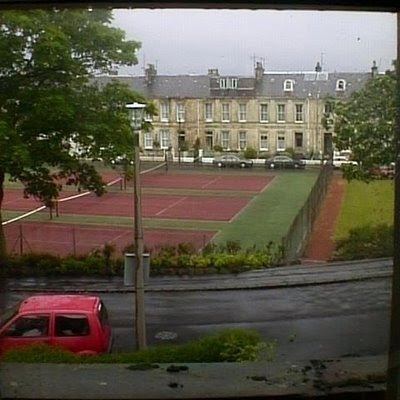 Mum and Dad originally upheld the old Scottish tradition of not using their best room, but keeping it nice for visitors. The Sitting Room was certainly the best room in the house, big, with two fine windows, a piano, and a grand mahogany mantlepiece. The chairs were comfier too.

Gradually, they relaxed this regime and by the mid-sixties the sitting room had taken over from the living room as the hub of family life. The change was driven by technology. I don't remember us not having a TV, because we got it in 1953 before I was a year old. It was black & white of course, and there was only one channel (The BBC). Broadcasts were only for a few hours at a time with long periods of close-down. The announcer used to say, "Please switch off your set". Then the white dot in the middle of the screen would get wee-er and fainter for about a minute before disappearing.

The other great purchase for the sitting room was the Radiogram, which replaced the wind-up gramophone. It was a wonderful machine, with an auto-changer deck that would take a stack of records, and drop them one by one onto the turntable. It could play 45s and 33s but we didn't have any. All our records were 78s. We had lots of old Scottish music hall stuff - Harry Lauder, Will Fyfe, William McCullloch with his monologues:

"The greatest surprise of the night was when Agnes's faither turned up sober. Oh, he looked so different, his ain dug tried to bite him. Even his wife didna ken him until he spoke and then she collapsed intae a state of sheer exhaustation".

They don't make records like that any more. The Scottish records and the Gilbert & Sullivan set must have been Grandpa's but Mum and Dad had newer gems, from Perry Como, Frankie Vaughn and even Bill Haley & the Comets - yes, the song that started it all. One two three o'clock, four o'clock rock - I had no idea what it meant, but liked the sound of it. It wasn't my favourite though. That would have been When the Saints Go Marching In, at least until we got the Ying Tong Song.

Music aside, the best thing about the Radiogram was the lid, a heavy wooden board that couldn't slam, because it fell slowly with hydraulic damping. This was magic. You could play with it for hours.

On Saturdays, we'd have tea in the sitting room and watch TV. This was one of the highlights of the week, and was quite a performance. The card table had to be fetched from the spare room, and the legs unfolded without catching your fingers. One of the wee retainer devices was loose and a total collapse was always an exciting possibility. We carried the plates of triangular sandwiches (no crusts!) and cakes through from the kitchen and set them out on the table in front of the fire. There were chocolate biscuits too, but you weren't to start with them. And you could only have one of the wrapped ones. The Penguins were supposed to be for Dad, so it was a treat to be allowed one, even though they weren't really as nice as mint or toffee Yo-yos. But that's what you'd expect from a grown-up biscuit.
the house