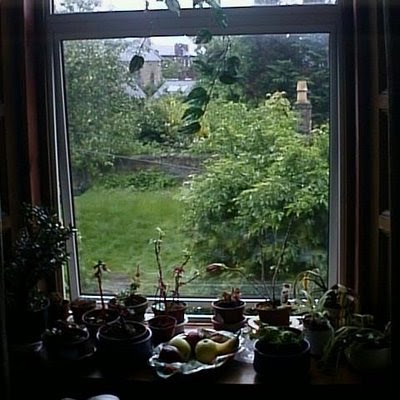 The Living Room was where we lived. Often, in the Winter, it was the only warm room in the house. The fire had a back boiler to heat water for the bathroom. There was also a damper that was good to sing about, "Oh you push the damper in and you pull the damper out and the smoke goes up the chimney just the same", but I never had a clue what it was for.

The window shelf in the picture came later, as did the window. Back then, it was the usual wooden sash with split panes. In front of it sat the wireless table (with the wireless of course). The wireless was none too reliable and smelt of burning dust. I liked keeking through the wee holes in the back to see the red glow of the valves. Sometimes, Dad would take the back off and poke around inside. The News was pointless and boring, but Uncle Mac's Childrens' Choice was great. During the week, when the others were off to school, Mum used to listen to Housewives' Choice, doing the ironing. The wireless table drawer was full of great things - black and green wire, horribly sticky black tape and some sheets of flypaper. There was a cribbage board called the wee peggotties, in an oblique acknowledgement of the existence, elsewhere in the house, of the peggotties.

Mum didn't let us keep toys and games in the living room, so we had to decide what we wanted to do, go and get it, then do it. Sometimes 'it' was a bottletop bath. For no discernible reason, Dad had a rigid leather case, possibly from an old plate camera, that was full of used bottle tops (crown caps). If you haven't tried it, to have a bottletop bath, you empty the whole lot onto the floor, sit on and among most of them and paddle your hands through the rest. You can also make badges from them by prizing out the cork disc using a pin, then pressing it back in place from inside your jersey, with the bottletop outside, naturally. Some had composite corks that broke to bits when you tried to take them out. Then, what you had to do instead was push the pin under the skin on your fingertips and get a row for being silly.

The living room looked down the street over the back gardens, the Robertsons, the people we didn't know, the Whalleys and beyond. The chimney belongs to the Robertsons' wash house. We didn't have a wash house ourselves, so they shouldn't really have had one either.

Meals were round the living room table. Breakfast was usually morning rolls and oatcakes, sometimes ham and fried bread, porridge, farex, weetabix, or rusks. And cereal, which often came with a gift in the new packet. We collected cowboys and indians, soldiers, bandsmen, farm animals, prehistoric monsters (I got the protoceratops) and racing cars. There are six kinds of racing car, called ones, twos, threes, fours, fives and sixes. Ones are short and squat. Twos are flat. Threes are thin with sticky-out wheels. Fours and sixes are quite similar, and fives are big. Don't let anyone confuse the issue with unnecessary terms like formula one or GT. There are six kinds of racing car, OK? Derrick got the pale blue three. You can have breakfast in your dressing gown on Saturdays.

Teatime was good if Dad got home on time. If he was late, there would be a set piece fight, not always, and not immediately, but often before the meal was over. This would be triggered by a question from Mum, "What did you have for dinner today?" Answer, "Two oatcakes". "That's not nearly enough. You should have a proper meal!" "But I didn't want a proper meal". And so on. Dad kept a bottle of lemon on the floor behind his chair and used to swing back to reach for it (to put in his tea) but never fell over backwards. "Don't swing back on your chair, you'll mark the sideboard!" "I'm not touching the sideboard".

The sideboard drawer was for the good scissors and the photographs. There was one of me in the garden with Buster, Honor's dog, and one of Dad standing on his hands on a diving board somewhere. I don't remember there being any pictures of windows.
the house