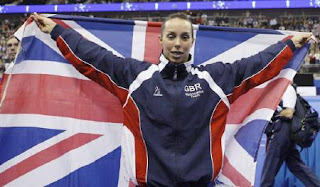 Last night, a few of us were watching, with more or less attention, the World Gymnastics Championships, on the big screen in Stufital Old Manger. Beth Tweddle taking gold for Britain in the floor exercise (Go Beth!) was an added bonus. Then, perhaps at someone's request, but without asking anyone else, Mr Syria changed the channel. To football. Local football. And not even a game of football. Just a baldy-headed git talking about football, with the sound turned down. OK, rudeness aside, how can a muted babbling baldy-man ever measure up to the consummate skill and grace of the World's finest gymnasts? And even if you hate gymnastics, the girls are still girls. Maybe the channel was changed because the leotards were deemed un-islamic?

I've started, so I'll finish. The trouble with football, apart from its gross overexposure, is that it's a flawed game. It's always played on the brink of the foul and so has more to do with what you can get away with than what you can do. And the scoring is boring. In Rugby, a single score can reverse the positions, and often does. In football, you can only ever equalise from a goal behind. Then there's the penalty fiasco. Years ago, the heavy leather ball was quite hard to blooter past a good goalie. There was a real competition at play. Now, every penalty is a goal unless the kicker makes a blunder or the keeper gets lucky. Pathetic. And there's the arbitrariness of it all. Foul outside the box - free kick. Foul just inside - penalty = goal. Stupid. The only good thing about football is that it's still amateur... what - you mean these tossers get paid?? Jings. Not too much, I hope.

Now, seriously. Columbia's Jessica Gil Ortiz took a bad fall in her floor exercise last night, shortly after Beth Tweddle's winning performance. Something went wrong in her execution of a double somersault and she landed hard on her head. After what seemed an age, she was fitted with a neck brace and stretchered off. Let's hope her recovery is fast and complete. Tough luck, lass.