Just for the (football) record... 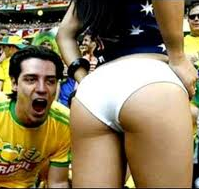 Spain won - Holland didnae! This is a note to me, to remind me of sitting here, in Bin Mahmoud, Doha, watching a World Cup final where the better team triumphed over a cynical, aggressive opposition who disgraced the name of sportsmanship. The Dutch came out to disrupt quality football (which they could never match) and almost succeeded. Knowing that the referee would not wish to send off a player in a World Cup final, they pushed the boundaries of hardness far beyond the norms of decency. Someone whose name I refuse to acknowledge planted his studs in the chest of an opponent in an assault that would attract a Grievous Bodily Harm charge anywhere in Civvy Street.
Regular readers here know my views on football as a flawed game in need of emergency maintenance. Tonight, the better team won. But does anyone think this game is in a healthy state?

The picture, obviously, has nothing to do with the final, but neither does the Paranormal have pretensions as an accurate football blog.