Doha: the Kings, the Roundabout, the Lambs & the Chickens

The King of Fashion was pretty central in Doha, about a hundred yards from Sofitel on the road towards the Royal Palace. It's not there any more of course, having been cleared to make way for Dohaland Phase One, the city centre reconstruction project. King of Shoes has gone as well. We do still have a King of Toys (such names!) in a part of Musheirib that has so far escaped demolition. This makeshift roundabout...

is right in front of where King of Fashion used to stand. It now marks the end of the road, except for Dohaland construction traffic. Everything beyond, excluding the Palace itself, has been flattened. It's hard to mourn the passing of the irremediable slum areas, but we have also lost a richness of small businesses from the city: hardware stores, haberdashers, tailors, juice stalls, barbers. The word community springs to mind. Still standing, but earmarked for demolition in Phase Two, is the locally named Chicken Street: 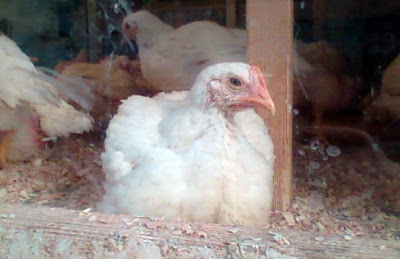 not named after this particular chicken, but the many thousands of its friends and relatives that have been sold live (or at least, neck drawn at point of sale) from the many chicken shops along the way. And before anyone says cruel, please note that these chickens are on wood shavings, with space to move, and have beaks and feathers, unlike many of their battery brothers. Of course, Chicken Street doesn't only sell chickens: 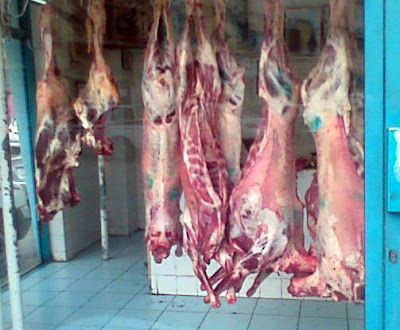 It's also the place for small local butchers. This is the immaculately clean Kashmiri Butchery where your meat is cut straight from the hung carcasses, in the traditional manner. When such places go, they never return and the city is the poorer for their disappearance.
doha reconstruction

By Para Glider October 16, 2018
'Accidentally killed during an interrogation' does not mean that the video camcorder suddenly exploded. It probably means that the torturers misjudged the cardiopulmonary health and resilience of their victim. Incompetence and evil form a lethal cocktail. For a State to offer 'Accidentally killed during an interrogation' as an exoneration is beyond belief, with its implied normalisation of torture, and the insulting assumption that others will accept this normalisation. But even in a world as dark as this 'exoneration' requires, producing the body for forensic inspection could provide absolute corroboration of the 'accident'. Continued failure to do so points to something darker still. Meanwhile, UK and USA continue to sell arms to this regime.
Read more