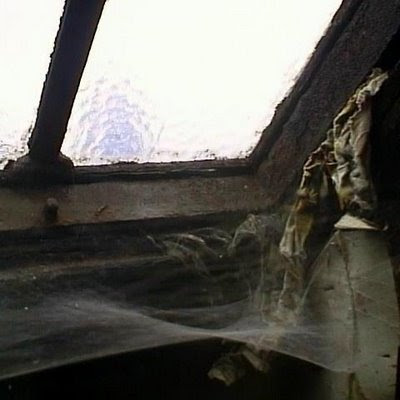 Dad didn't keep a tidy workshop. Every once in a while, he'd decide to impose some order on the chaos, and move things around. But it was a lost cause - there was just too much stuff.

At tea time, Mum would tell one of us to 'give daddy a shout'. The options were: bellow from the bottom of the attic stair, shout at the ceiling just outside the bathroom, or go upstairs to the workshop and say "A shout".

The skylight was a heavy cast iron affair with rippled glass, and provided the only ventilation to the workshop and the printing room. It could get very hot and stuffy up there in summer. Originally there were two skylights, but as the second one was above a part of the attic that you could only reach by crawling under the work-bench and through a hole, when it rotted and started to leak it was taken away and the roof slated over.

If I had to pick one favourite thing from the workshop, it would have to be the box of framed paper pictures that changed with a light behind them. Some were night & day scenes. Others changed completely, from a pastoral scene to a palace. Only one was damaged beyond use, from before my time.

*Men Only, in the early fifties, was a small quarto publication, largely text, with articles on sport, motoring, travel, etc. Occasional issues would have a topless model photographed in black & white. The magazine was not what it became.
the house