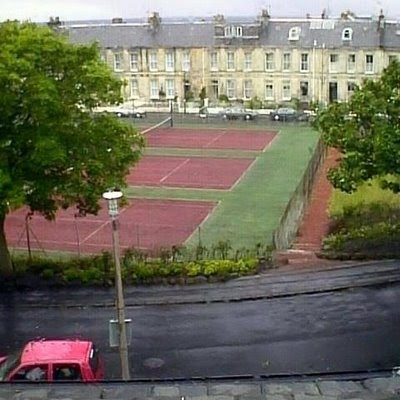 I'm sitting on Dad's shoulders. There's nobody else in the house and we've just listened to "Sailing up the Clyde" on the wind-up gramophone in the sitting room. We're now walking up and down the corridor, Dad giving his own rendering of the Will Fyfe classic in his idiosyncratic light baritone, and pausing after 'bide' to explain what it means.

Mum and Dad had a relationship with Scots that was typical of the social class and period. They spoke standard English with mild local accents and a few Scots words thrown in. If this was a form of gentrification, it was still very much the norm for schoolteachers at the time. I remember wondering why Mum's people, especially Aunts Polly and Aggie, spoke so broadly, and why it was OK for them, but not for us. But I never asked. On the other hand, posh was wrong too, when friends sent their kids to private school in Edinburgh and they came back with 'English' accents. It seemed nobody spoke properly in those days, except us.

Now we're going up the attic stairs! This is a treat because I'm still not allowed to climb the steep flight on my own so I don't get up here nearly often enough. Derrick and Douglas share the attic bedroom at this time and I sleep in the back room on my own. Later, when I'm big enough to manage the stairs safely, I'll move up to share with Douglas, and Derrick will get the backroom to himself "so that he can work for his Highers". Though I don't yet know it, he'll also get an ultramodern 60s-style wooden bookshelf set that I'll be very jealous of. It will be shaped like a stretched piece of Toblerone, but I won't make that connection for another 50 years or so, when I'll do it retrospectively on something still unimaginable called a blog - och shut up!

The front attic was brilliant. It had the only view of the sea from any window in the house, being high enough to see over Eglinton Terrace. We got wonderful sunsets over Arran. These sunsets, by the way, sound exactly like seagulls on the roof and smell of paraffin. In the winter, we'd light the heater, which would make the windows stream with condensation. In the mornings, you could scrape the ice off the inside with your fingernails. But this all came later, for me.

Dad lifts me down, says, "Wait there a wee minute Daidy-toor" and goes into the workshop to get something. I wander out to the top of the stairs just to look at Grandpa's 'stinguisher', an ancient conical purple contraption with a nozzle at the top and a button on the bottom. I know that all I have to do is lift it off the wall, bump it down on the button and . . . but not today. I'm still not strong enough.
the house