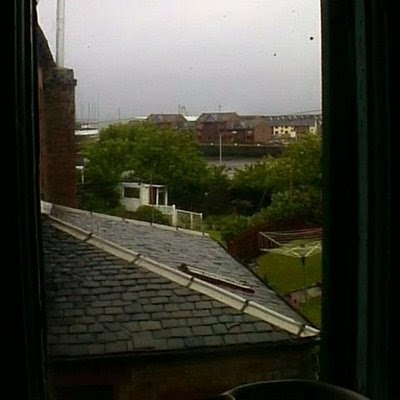 Back in the 50s, nobody ever saw out of the pantry window, partly because it was small and high, but mostly because it was behind the perforated zinc fly-screen that gave bug-free ventillation to the old slate meat-shelf below. When Dad took the slate shelf away, it went up to the attic for a while, for no good reason, then, for no better reason, into the garden to lean for evermore against the granite wall, just by the bee-y plant.

When the ball went into the Wilsons' (formerly Robertsons') garden, the slate gave a foothold for climbing onto the wall but, because of the much greater drop, you had to dreep doon on the other side, like wee malkies. So, there was no easy way back. If Kim (the fawn dog) came out, you abandoned the ball and sprinted flat out down the garden. There, there was a heap of stones piled high enough against the back wall to let you climb to the relative safety of a precarious walk home on the loose coping, with a yapping hound on the left and an eight foot drop to the back lane on the right. At one point, the telegraph wires sagged low enough to touch. 80-volt ring tone is not lethal, but stings a bit, especially if it's raining and the wires are wet.

To make a bolas, you tie the ring-tops of two bottling jars to the ends of a few feet of hairy string from the dark room. Sooner or later, it gets tangled round the telegraph wires, just like the kites and parachutes. You throw the long clothes pole at it and on the third attempt, bring down the telegraph wire. You remove the bolas from the broken wire, hide it, put the clothes pole back on the lawn and decide to play inside.

Speaking of jam-jars*, the jelly pan lived on a high shelf in the pantry. Mum was a pretty good jam maker: raspberry, strawberry, bramble (my favourite), red and blackcurrant, gooseberry (which nobody liked much), and of course marmalade. I liked adding the sugar, helping to stir it, and sampling the 'licks' as soon as they were cool enough.

* jam-jars - the insulators on telegraph poles. The wires were spaced apart and bare, not insulated pairs like today's.
the house