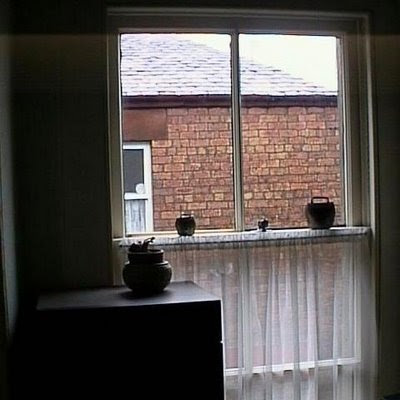 Dad's black Anglia, HAG 390, had a choke and a starter, two cream coloured pull-knobs in the middle of the dashboard. A little below were two smaller cream coloured knobs. These could only be the wee choke and the wee starter, because that's what they looked like. Some would argue that they were the heater controls, but it's appearance that matters.

It was the same in the house. Along the corridor from the Big Bunker was, the Wee Bunker. So what if it was really a small front opening window-cupboard and strictly not-a-bunker-at-all? The laws of how things are must prevail. A Big Bunker requires a Wee Bunker. That's how it goes.

One of the great things about the Wee Bunker was the smell when you opened the door. This was where we kept the soap, the paraffin, the shoe brushes and polishes (kiwi-black or kiwi-brown) and the firelighters. We kept matches there too, to tempt providence. The peg-basket didn't smell of much. Old grey wooden pegs, new yellow ones and broken-plastic ones (there was no plastic back then, only broken-plastic) - you had to get very close to smell the pegs, and when you did, they all smelled of firelighters anyway, like everything else in the Wee Bunker.

There were a couple of mousetraps, which could really hurt, and a load of other stuff that could only have been there to keep the bunker full, because nobody knew what any of it did.

It wasn't much of a window for looking out, the Wee Bunker, and the compulsory net made sure it wasn't much good for looking in either. That's what windows were for then, semi-transparent things to avoid seeing or being seen through.

By the way, the black shape in the foreground is a microwave oven. There was never room for it in the kitchen so it had to sit outside on the Wee Bunker. But that was much later. They still hadn't been invented. Older than the microwave, but dating from the sixties, not the fifties, are the two objects perched on top of the lower sash. It should now come as no surprise to learn their names. They are the Big Cowbell and the Wee Cowbell.
the house