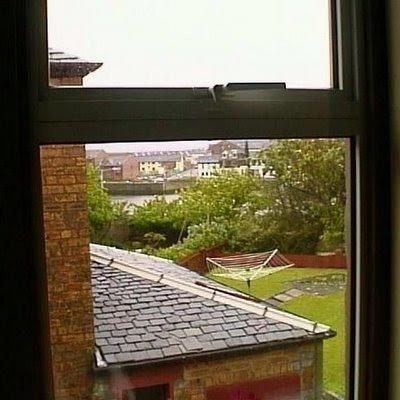 The kitchen wasn't big enough to swing a cat in. There was always one available, but Fitzy Puss McClure was quite a serious chap and not really the swingable type. Outside, and not welcome in the garden, were Theblackcat and Thegreycat. Mum kept a stoneware jar of ham-skins (bacon rinds) on the kitchen dresser and, for a dangled sample, Fitzy could be induced to dance on his hind legs. This, and grass, formed his staple diet, though once he varied it by stealing a mouthful of my red caps. Red caps were round-like-a-wheel not round-like-a-ball and blue caps came in a roll. So the blue ones were better for the cap gun and the red ones better in the wee rockets that you threw into the air, to go bang on landing. Mine was the yellow one.

The window in the photo is a latter-day replacement of the original sash, and one of only two that were ever replaced. (The other was the Living Room). Under the window was a double porcelain sink. The one on the right was usually covered with a board, except on wash-days, when the wringer was clamped onto the divider between the sinks. Sometimes we got to wind the handle or feed the wet clothes and sheets between the rollers, keeping our fingers out. The other kitchen handle I liked turning was the mincer, especially if it was breadcrumbs.

The only electric appliance in the kitchen was the washing machine. The cooker was gas and there was still no fridge. Derrick had a Bunsen burner and was allowed to partially dismantle the gas cooker to fit the rubber tube onto the supply. Douglas's chemistry set had a paraffin burner with a sooty flame. He also had Sooty, who looked completely different in the mirror. The washing machine was a single vertical tub that had to be filled through a thin red hose clamped to the tap and emptied back into the sink through a thick black one. It made a great noise and used Rinso.

Once a week, Mum "phoned through the messages" to George who kept a grocer's shop in Fullarton Street and lived in the other red sandstone house. It was a fine shop with jars of sweeties, boxes of red and green apples, and a coffee grinder that I can still smell working. He would weigh out loose sugar and flour on a scale using polished brass weights, pour it into stiff blue paper bags, then seal them with Selotape. When the messages were delivered on a Friday evening, the treat was to "do the pouring ones". This meant, open the bags and pour the contents into our pantry storage jars. And taste the sugar to check it was OK.

(By the way, the view over the harbour from the kitchen window was not possible until the South Harbour Street warehouses were knocked down, sometime in the 70s, I think).
the house