This is the house - 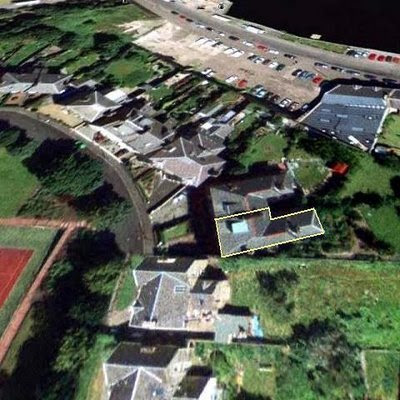 - that John bought. It was built in 1894. John, my grandfather, must have been built a little earlier, but family history was never my forte. By the time I arrived on the scene, all four grandparents had coiled their mortal slips, the house had been flatted and the downstairs (we never called it the ground floor) sold to Mrs Gordon who ran it as a B&B guest house.

Mrs Gordon merits a paragraph. She was born old, with grey hair tied in a bun. She kept two huge carved wooden pipes on the mantlepiece. Sometimes she would chop wood with a hand-axe. She didn't like us climbing the fence, looking for red ants in her rockery, running on the stairs, shouting, or breaking her window even by accident. I liked her.

Though I never knew old John McClure, the house was full of his presence through what he left behind - walking sticks, plate cameras, brass lenses, a set of bowling balls, ivory chess and draughts sets, silver cigar boxes, a strange pewter coffee pot that you could do tricks with by blowing up the spout, clay pipes... Furniture too, but I'd no interest in that. He must have been great.

I lived in the house from 1952 to 1970, my pre-school and school years, and it was still my home-base through my University time, though I stayed in Glasgow during the term. In October 74, aged 21, I went to London and though there was always a bed for me 'at home', I never really lived there again.

About five years ago, when Mum died, my brothers and I sold the old place. I've not seen it since, even from the outside.

On one of my last visits, on a whim, I walked through the house taking a photograph of every window. Not through every window. I didn't open them to capture the view. These are intentionally pictures of the windows, from inside. The outside could take its chances. Over the next few days, I'm going to post these window pictures, one at a time, each with a memory from my early years - a 50's snapshot, if you like.

(The aerial picture is from Google Earth. I like it because it it lends context to the window pictures.)
the house

By Para Glider October 16, 2018
'Accidentally killed during an interrogation' does not mean that the video camcorder suddenly exploded. It probably means that the torturers misjudged the cardiopulmonary health and resilience of their victim. Incompetence and evil form a lethal cocktail. For a State to offer 'Accidentally killed during an interrogation' as an exoneration is beyond belief, with its implied normalisation of torture, and the insulting assumption that others will accept this normalisation. But even in a world as dark as this 'exoneration' requires, producing the body for forensic inspection could provide absolute corroboration of the 'accident'. Continued failure to do so points to something darker still. Meanwhile, UK and USA continue to sell arms to this regime.
Read more