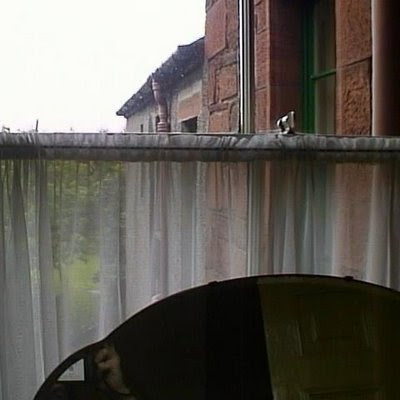 Two down, ten to go (that's how many windows I photographed) and I've decided to get the spare room over and done with. Looking at all twelve pictures, it's the only one that gives me no pleasant feelings. It's strange how, so many years later, I've suddenly happened on something that I must always have felt, but didn't really know till now: I never liked the spare room at all.

The dressing table all but filled the window, and such light as could squeeze through somehow made you look a bit sick in the mirror. Or maybe it just wasn't a nice mirror. The dressing table drawers were for holding tea-towels, Mum's bible and the hymn book. These (not the towels) were taken to church every second Sunday except when we didn't go. Dad never went to church and had a long lie every Sunday. I didn't like church except the bit where Mr Telfer would announce "the Children's Hymn during which the little children will leave". Then Miss Somerville would lead us, holding hands in a chain, into the church hall while the hymn was still going. Maybe she didn't like church either. Sunday school was good fun. She'd show us a big picture of Jesus and let us draw chickens.

But back to the spare room. Douglas had measles in it and it had to be kept dark because bright light would hurt his eyes. I wasn't allowed to go in, but Dad was, and when he gave Douglas a green acetate eye-shade with a stretchy black head band I wished I had measles too.

Strangely enough, I never caught it. I got German measles instead which spread like wildfire but didn't hurt at all. I used them to play golf for a week, at Seafield, in Wellingtons and a green jumper, with Grandpa's old hickory clubs. But that was 1963 and I was a big lad of 10.

The spare room wasn't just a sickroom of course. Aunt Polly was quite a regular visitor, with or without Uncle Donald. She nearly always brought smarties and even tablet. But best of all was that she let you interrupt.
the house