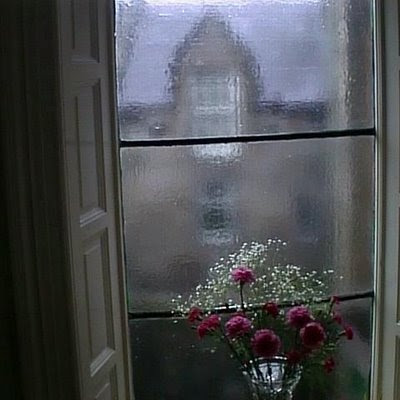 There were seven stairs down from the hall to the Wee Landing and twelve more down from the wee landing to the glass door. This is the wee landing window as seen from the second top step of the flight of seven. (We might as well be accurate here). It was a big window, but not as big as the one halfway down the main flight. Both stair windows were uncurtained but were of rippled glass, reducing the outside world to tonal blocks. (Are you listening, Ewan?)

In later years, the wee landing window shelf, like most of the internal woodwork, was painted white, but back in the 50s, dark brown lacquer was the order of the day. And before Grandpa's crystal vase took pride of place, we used to grow plants on the shelf - cacti, geraniums and patience, mainly. I helped them on their way by feeding them plantoids at every opportunity, from a faded green cardboard box. Plantoids, though they look like mixed oddfellows, should not be eaten, but should be administered to favoured houseplants at the rate of about ten a day until bored. When watering the plants, the trick was to get the water to go under the glass shelf. Then every plant had to be lifted down and the shelf taken off and dried. This was a treat.

Major Robertson lived in the ghost house in the window, smoked a pipe, had a dog, Jim, a wife, Vera, a daughter, Sheila, about Derrick's age, who kept rabbits, and another, Jane, who was younger than me and didn't count. There was something about Jane and a tortoise called Slough-Couch but I can't remember the detail*. Mum and Vera used to talk across the garden wall. Our ground level was a good three or four feet higher than theirs, so Mum leant over the wall and Vera stood below, looking up. The Robertsons were the first people in my life to move away. Till then, I'd always thought people just stayed. On the night before they moved, when they came to the house to say their farewells, they didn't even notice the huge change in Dad. I couldn't let this pass, so interrupted with "Dad you look funny without your moustache!" Job done, I was rewarded with the sounds of general merriment that I'd been waiting for. Moustache gone, Dad never again sported any facial hair.

*postscript: Derrick reminds me that Jane said "If I dropped a brick on Slowcoach, would he break into a hundred pieces?" We didn't let her put it to the test.
the house